← Security Is To The Max For Apple’s Live Event on Tuesday, September 9th
iPhone 6 Has The Fever! And It’s Contagious! → 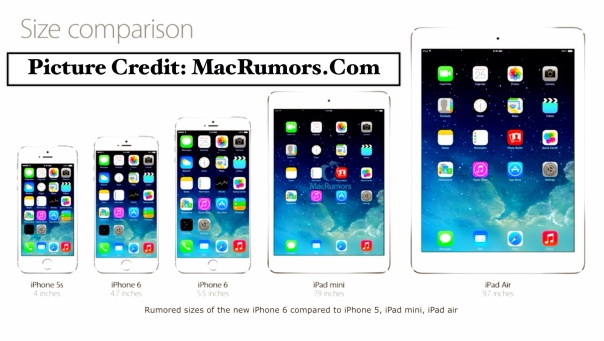 With less than two hours to go before Tim Cook And Company take to the stage, the rumours are buzzing about what we can expect at this unbelievably hyped Apple Event in Cupertino, California.

MacRumors designed a wonderful photo – pictured above – about the prospective dimensions of the new iPhone (s) in relation to the iPads.

If all goes as rumoured, the iPhone 6 will be larger than its predecessor and that’s fine with me. It is not my main focus, however. I am more anxious to see and hear about the advanced technology included with this product. Near Field Communications (NFC) and an improved camera are appealing to me and I cannot imagine that either will be forgotten or acknowledged at this event. Enough with the horrendous low light resolution already !

And let’s not forget iOS 8 rocking your iDevices. I have waited long enough. I want it now.

Last night, I had a dream that Apple released a 4-sided iPhone. It was pretty cool, actually, and realistic. Too bad I had to wake up. There were screens on both side of the iPhone and buttons for “who knows what” on the side. You could run two Apps at a time and interact between both.

Why am I telling you this? Well, it passes the time before the Apple Event begins and affords a chuckle or two at your end. Laugh! I don’t care. At my age, nothing ruffles my feathers.

You can watch the stream of the Apple Event on Apple.Com or on Apple TV. beginning at 1:00 PM Eastern.

And check out the rumours and predictions atMacRumors.Com.

Does anyone out there think there is a full size Apple Television in that newly erected white building beside the Flint Center in Cupertino? Seems pretty large for iPhones and iWatches?

GTG Rumor: Could there be an IWatch fashion show in that big white building? .

Live update will begin at 1:00 PM. Comment away geekies! Live event update inside:

1:08 PM: Tim Cook is hitting the stage and he is introducing the new iPhone. In two sizes. It is beautiful. They are called the iPhone 6 and iPhone 6 Plus. The sizes are 4.7 for the former and 5.5 for the latter.

1:07 PM. IPhone 6 has 1 million pixels and the iPhone 6 Plus has 2 million pixels. Thinner phones that Apple has ever made. The contrasts are higher, the text is brilliant because of the Retina Display.

I have to stop the updates because the streaming is not working at my end – neither on Apple TV or on Apple’s website. What a nightmare.

1:24 PM: Phil Schiller is back on stage. He stresses the new iPhones much better battery life. Thank heavens. About time. There is an A8 co-processor which will complement fitness applications. There is a barometer built into the iPhone 6 where you can measure the number of stairs and/of the distance you run or walk.

1:27 PM: There will be faster Wi-Fi and you will be able to make calls over the Wi-Fi. This will broaden internationally over time.

1:30 PM: Camera has improved. I am doing a happy dance here. 8MP iSight Camera, True Tone Flash, All-New Sensor. There is a new “thing” – focus pixels – allowing the phone to focus twice as fast as previous generations. He is showing sample pictures and they are beautiful. Very bright and clear due to stronger noise reduction. I don’t know how they gave accomplished this but kudos to the engineers. This is amazing technology.

1:33 PM: Streaming down again. Must be a traffic thing. This never, every happens at Apple Events. Very frustrating at my end.

1:38: Streaming down. This is totally unacceptable. Someone is going to be fired today.

← Security Is To The Max For Apple’s Live Event on Tuesday, September 9th
iPhone 6 Has The Fever! And It’s Contagious! →