← Shine Up Your Apple Watch. Apple Pay Has Added More Canadian Banks To Its Roster.
Musical.ly with Kyra  →

Sometimes, it just pays to be honest. And, since I am a good old – fashioned Catholic girl, this whole honesty thing has been ingrained in me since childhood.

And, I put this practice to good use when Apple accidentally sent me two watches when I, in fact, was waiting for one to arrive.

Here’s my story and the ending is a happy one:

So, as you can see from the picture above this article, I received an Apple water bottle, thermos, t-shirt and journal.  Very cool. I was like a kid in a candy store. Seriously. It made my day.

Now, I know some of you would say – why didn’t they let you keep the extra watch? Uhm – maybe because it would set a precedent?  I never expected that to happen but I really didn’t expect the gift either.  In the end, I could sleep better at night knowing I did the correct thing – and that is what made the difference to me in the way I like to go about my life.

So thanks Apple for respecting your customers so much. It’s nice to know that good, old-fashioned customer service is at the top of Apple’s to-do list every day.

Oh, and by the way, I have made it a habit to purchase Apple Care for all my Apple Products. It’s a small price to pay for the safety, security and longevity of your device.

Extra Bonus – My 10-year-old granddaughter was pretty proud of her grandmother. She christened my Apple Journal with this note. A couple of grammatical/spelling errors but who cares, right?  It’s the thought that counts. 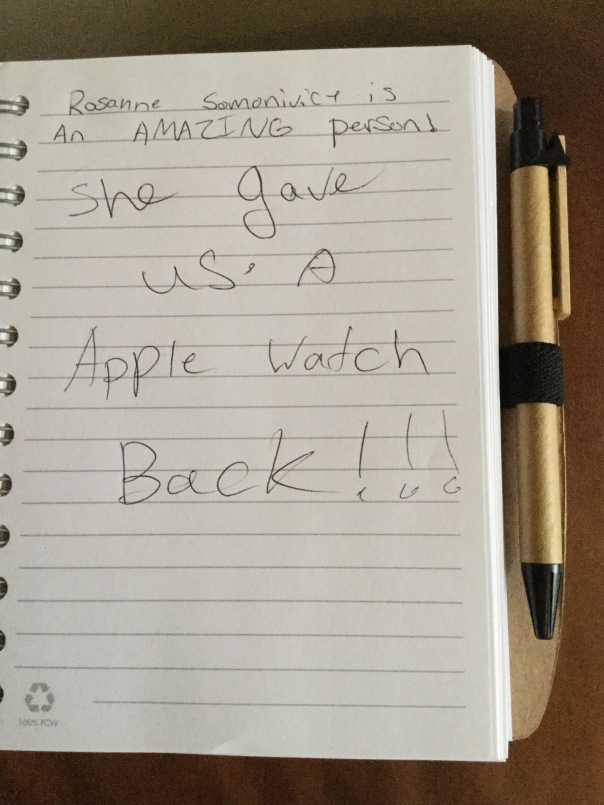 ← Shine Up Your Apple Watch. Apple Pay Has Added More Canadian Banks To Its Roster.
Musical.ly with Kyra  →