← The Type A – pple Approach To Detail. Apple’s Obsession With Perfection
Happy 57th Birthday Steve Jobs. You Are Missed! →

Move Over Lion. There’s A New Kittie Cat On The Block And It Is Huge. 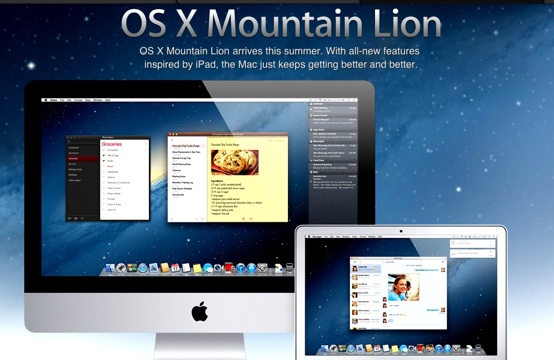 Apple is moving fast and furious with their updates and news releases. First it was IBooks Textbooks For The IPad, IBooks Author, then the leaking news about the imminent release of the IPad 3 and now, yet another update for the Mac.

Introducing OS X Mountain Lion – the successor to Lion OS X. And, it looks like this Mac App only update, scheduled to be released in late summer, is going to fill Lion’s shoes – or paws, so to speak, very nicely.

Everyone is giddy with excitement, as this update will be a true reflection of everything that is now possible on the IPad. Except, now you can sit at your Mac, texting and tweeting the hours away as you work on your Mac projects.

Here are some of the highlights of Mountain Lion, from the pages of Mashable.Com:

And Mac OS X has had to throw out some of its stuff. Bouncing icons in the dock? Who needs them when you’ve got Notifications, which appear in classy banners down the side of the screen? The venerable antique Instant Message software, iChat, a 2002 vintage? A stupid wagon-wheel coffee table, says iOS. Throw it out.

Instead, here’s iMessage, which will still let you IM your contacts (if you must). But what it really wants you to do is use Apple’s seamless texting replacement of the same name. Admittedly, the thought of being able to immediately text anyone with an iPhone for free from your desktop is so unbelievably cool, it can bring on an attack of the vapors.

You get the sense the Mac is going to be happy with its new roommate. What’s not to like about Airplay, which can seamlessly mirror your desktop on an HDTV? Or a separate Notes app, where you can attach notes to the desktop like stickies? Or Game Center, which will mean a lot more cross-device play?

Or a “share sheet,” which effectively means developers are going to be able to put Twitter buttons everywhere? Mountain Lion will already let you tweet from all standard OS X apps such as Safari and Photo Booth. That means you can sit and take photos of yourself and instantly tweet them, to your heart’s content. It’s a boon for Twitter users (Twitter readers, not so much).

And, of course, everything will be seamlessly synchronized with your mobile devices via ICloud. So, for example, if you are working on a Pages document on the Mac, your work will be stored in the cloud for future access on another device. Or vice versa. The possibilities are endless.

Technology is a very good thing. And Apple technology is even more exciting, healthy even. You know, “An Apple (product) a day keeps the doctor away”. And, when you are a senior citizen, this motto makes even more sense and resonates to a higher degree.

So, if you haven’t upgraded to Lion, does this bit of news entice you to do so? I finally caved in January and, at the time, wondered what took me so long? It went without a hitch.

My only concern: isn’t Apple going to run out of cat names soon? Cheers!

← The Type A – pple Approach To Detail. Apple’s Obsession With Perfection
Happy 57th Birthday Steve Jobs. You Are Missed! →